Weird '71 Cardinal puzzle I found at an estate sale on Saturday has weird fact about a Roman Catholic priest being the first quarterback of the Cardinals, a fact not verifiable anywhere else on the Internet. 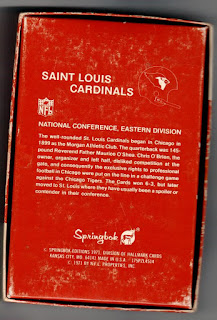 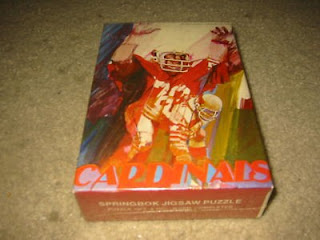 Posted by Emmett McAuliffe at 1:26 PM No comments:

I've Never Seen Anything Like It: Trump's Blitz of Bush

Donald Trump surveyed the Republican field back in June. He correctly surmised that the only candidate who provided a real threat was Jeb Bush. Trump's strategy was to hit Bush early and hit him hard before the juggernaut that elected his father and brother could even get started. The strategy consisted of:


The strategy worked monumentally. Bush barely ever crossed out of single-digits in polls or in results.  Jeb pulled out Saturday, after just the third of 50 state primaries.


I have never seen anything like it in my lifetime of watching politics.

Unless another generation of Bush politicians comes along some day, it brings a sad ending to the Bush family political legacy that started with Senator Prescott Bush in 1950.

Posted by Emmett McAuliffe at 3:26 PM No comments:

David Bowie: Out of Ohio

It's ironic that the late David Bowie is being celebrated as a consummate cutting-edge cosmopolitan or even the Ultimate Brit. But his style is directly attributable to a guy from Ohio: the little-known Scott Walker.

So what changed Bowie's singing style in 1965 from this:

The same guy who was on Eddie Fisher's TV show:

"He's been my idol since I was a kid," Bowie once said of Walker. David executive produced 30 Century Man, the 2006 documentary about Scott.

Here are several links discussing the huge impact of Scott Walker on Bowie's career (as often admitted by Bowie himself):

Walker's influence on Bowie was at the very beginning but also, as Walker himself changed (Changesonescott?), at the very end, with Blackstar:
http://www.rollingstone.com/music/news/hear-david-bowies-haunting-blackstar-theme-from-last-panthers-20151006

David is dead, but we still have Scott Walker with us to remember him by!  In 2015 Scott Walker composed the score for the film The Childhood of a Leader.  Scott Walker was very much a leader, influencing David Bowie who influenced scores of musicians on his own.

Posted by Emmett McAuliffe at 11:02 AM No comments: