The smaller the house, the more beautiful the Xmas light display

I visited the St. Louis neighborhood of Lemay last night.  It sits on the banks of the Mississippi river.  And in St. Louis, that is not generally a good thing for real estate value.  For historical and political reasons, Lemay escaped any kind of serious building code-based uniformity.  The result is beautiful tiny houses, each of them unique.  And their Holiday lights displays are every-bit the house's equal for quirk.  Poorer folks tend to hang on to their light displays to the point that they start to fade and change colors, ... sort of pastelize (sp?). 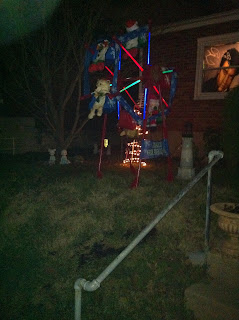 Ferris wheeled bears, precious moments, Elvis in the window and a classic example of the St. Louis Iron Pipe Hand-rail::

340 Rauhut in Lemay, a rental property apparently.  These renters really throw down: 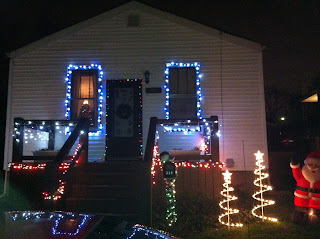 A couple shots of 9453 Gentry.  Beauty in variety.  White light and glossy white picket fence with wreaths and bows: 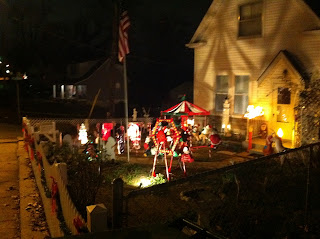 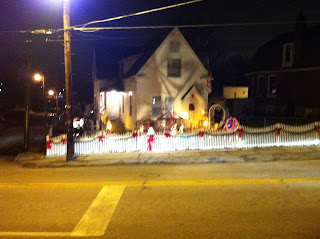 Faded blue lights, almost white.  Everybody knows I am partial to blue.  It's more winterish than red and green.  A minimalist approach at the rental property at 962 Dammert Ave.  Watch your step: 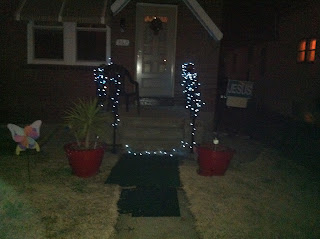 Un-raked leaves plus chaotic light placement, colors ... for an effect as beautiful as an abstract painting: 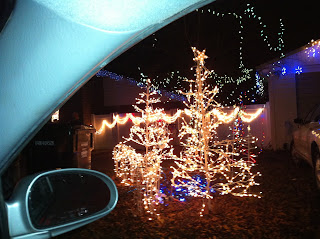 Having nothing to do with Christmas lighting, an apparently year-round display featuring three silhouettes of children running, at 9455 Gentry: 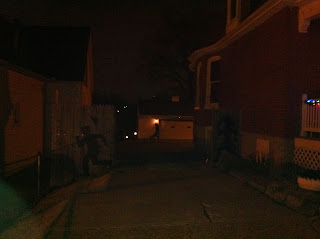 By being unafraid of being tacky, the denizens of Lemay end up being twelve times more tasteful than the lighting displays found on the typical McMansions of West County St. Louis.

Pick out one of these streets and drive for a half-mile around.  Neighbors have obviously influenced other neighbors ... but not in a "keep up with the Joneses" sort of way.  The Luxemburgers* gave up on worrying about that a long time ago.

Posted by Emmett McAuliffe at 9:20 PM No comments:

A Pujols Commentary You Haven't Heard Yet

There are far too many links to the Albert Pujols free agency story to list here, profitably.  Suffice it to say that Pujols is not leaving St. Louis on the best of terms and it might not be his fault.  But it is a shame that the St. Louis Cardinals improbable World Series victory* has to be tainted with a Leaving Controversy.  I see the Cardinals 2012 calendars, with Albert pointing skyward as the January photo, lying unbought at the St. Louis area Samsclubs and I know what's going on.  The sweet taste of victory has soured on the tongue of St. Louisans. It is like Bob Gibson started pitching for the Red Sox in 1968.  Or Ken Boyer bolted to become a Yankee in 1965.  Or, even worse, it is like Stan Musial bolted Eddie Dyer and the Cardinals in 1947 to go on to a solid ten years .. with the Dodgers.

Sutter, Porter, Ozzie, Hendrick, Lou Brock, Curt Flood, ... even Mike Shannon and Nellie Briles ... they were all back with the Cardinals the next year after sipping that World Championship champagne.  Clubs didn't "build for the future" the year after a championship.  They rested on their laurels ... and brought the champions back the next year for at least a victory lap.  Even the 1944 AL champion St. Louis Browns, beaten out by the Cardinals four games to two in the World Series, made only two moves in the off-season (selling backup shortstop Floyd Baker and signing future rookie-of-the year Roy Sievers).

I know that free agency makes everything different now.  But it is still possible to stay with a team.  Somehow, Pujols and the Cardinals should have made that happen,.  For old time's sake, if for nothing else.

* folks, lets face it, that series had EV-RY-thing from Tony LaRussa's Roman soldier/lawyer stoicism to Ron Washington's disco tap-dancing chipmunk cheerleaderism, plus Samuel Jackson-style locker room rants ... and everything on the field too.
Posted by Emmett McAuliffe at 8:35 PM No comments: